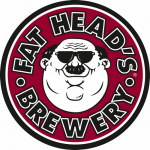 For the longest time (since we opened) Fat Head’s would not allow us to sell their delicious libations in Growlers. That embargo was recently lifted and we’re having a party to celebrate. Tonight they will be invading our taps with 9 of their coolest beers and some free swag!

Honey Blueberry Wheat. Brewed with fresh harvested spring honey stolen from some very angry bees (we have the welts to prove it) and infused with our own special painstakingly handpicked blueberry essence. A light refreshing wheat beer with a nice blueberry aroma, crackery malt flavors with a hint of sweetness and a light tart blueberry finish.