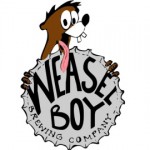 Linser’s Wiener Lager, the second in a series of pre-Prohibition-style lagers that the Zanesville brewery will release this year and next.

The lagers are based on beers made by The Simon Linser Brewing Co., the last operating brewery in the community before Prohibition took effect in Ohio in 1918.

“We’ve taken great pride in trying to recreate historically accurate recipes for this series” said Weasel Boy co-owner and Brewmaster Jay Wince. “This has been a labor of love with respect for classic styles that had basically disappeared for the last 90 years. The emergence of the craft beer movement has been instrumental in saving many of these styles from obscurity, some of the lesser known lager styles especially. We’re proud to be bringing the beers of our predecessors back to the consumer.”

Linser’s Wiener Lager is a Vienna-style lager that originated in Austria in the 1830s. Wien, pronounced ‘Veen’, is German for Vienna. The beer is 4.6% alcohol by volume and is characterized by a smooth malty aroma and light malt sweetness with soft toasted malt character. The beer finishes clean and crisp.